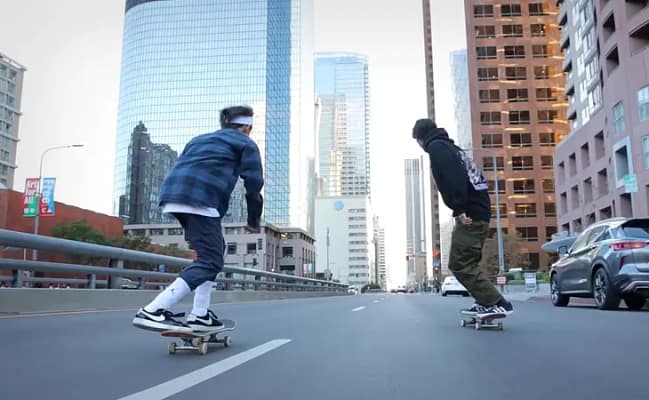 Street Vs Park Skateboarding: Find Out What Suits You Best

Street vs park skateboarding require proper discipline and setup of your board. Without that, the enjoyment of skateboarding will be lacking. We must learn about the individual styles and their setups before we hit the street. Let’s check them out.

What Does Street Mean In Skateboarding?

The hurdles to street skateboarding are:

You could slide on the mentioned hurdles. For instance, you are sliding down a railing or on a bench. Grinding the metals around the wheels on surfaces like rails and curbs is also an intricate trick by skaters.

As the hurdles involved are seen daily on the streets, the originality and creativity of your stunts are valued here. You can do the tricks on an actual street, but you have to be careful not to get into accidents.

Rather than gaining speed and momentum, you perform ollies and ollie variations when descending staircases or grinding on rails and ledges.

Occasionally, street riding may feature skating transitions, but this is primarily to maintain speed during a run. In street skating, transitions are solely used to maintain momentum. So street sections are still designed with quarter pipes at both ends of the track.

In the competitions, you get two rounds of a 45-second run to gain points and perform singular tricks. You can attempt singular tricks five times to prove your skills.

The necessary setup steps for your skateboard when doing street skateboarding are:

Here are some of the advantages particular to street skateboarding.

Street skateboarding style requires you to master performing tricks on hurdles found around the streets. Thus, you can practice on unoccupied streets where not many people gather.

You can practice on various hurdles such as handrails, staircases, benches, etc.

Here are some of the disadvantages, mainly of street skateboarding.

As the hurdles of street skateboarding are high and require precise control of your skateboard, it is hard for beginners to perform.

Although you can find streets to practice, you might feel distracted if there are people around.

What Does Park Mean In Skateboarding?

Park skateboarding is a style in which skaters compete in a hollowed-out concrete bowl with smaller curves and ramps. Park skating is any skating that involves skating lines and flowing through various park sections at a skatepark. Even if it includes flatland tricks like ollies and flips, still considered park skateboarding if it contains transitions and vert.

The major platforms in park skateboarding are:

The sides of the bowl rise steeply, forming a vertical (or nearly vertical, depending on the course) wall from which skateboarders launch themselves into the air. Hoping to gain enough height and momentum to perform mid-air tricks.

Skateboarders’ performance is judged on the difficulty of their tricks performed. The more complex the trick, the more points you stack up. Also, showing original tricks can help them get massive points. Skateboarders do tricks like grabbing the board’s deck, flipping or rotating it mid-air, or turning their bodies mid-air. They can also do tricks like grinds and slides on the board’s lip.

In the competitions, you get three rounds of a 45-second run to gain points and perform tricks for park skateboarding.

The necessary setup for your skateboard when doing park skateboarding:

Here are some of the advantages particular about park skateboarding.

Park skateboarding is best for beginners as you can practice in skate parks safely.

Also, there is no distraction from people walking around as in street skateboarding.

In the case of park skateboarding, you get three 45-second rounds to stack points and more time than street skateboarding to gain points.

Here are some of the disadvantages particular to park skateboarding.

As skateparks are the hub of practicing skateboarding, you might find it hard to practice among skilled skateboarders or veterans.

You might find it hard to practice among the busy skate parks filled with skateboarders.

What are The Similarities and Differences between Park Vs Street Skateboarding?

The many similarities found between street and park skateboarding are:

There are many differences between street and park skateboarding.

Comparisons of Street Vs Park Skateboarding

Below, a table is shown the necessary setups for skateboards in both styles of skateboarding.

Here, I answered some of the most asked questions.

Is Tony Hawk a street skater?

Yes, he was a street skater. In the history of skateboarding, Tony Hawk accomplished a lot. During the 1980s and 1990s, Tony Hawk was at the height of his career. He was renowned for his “vert” or vertical skating abilities. From 1984 until 1996, he won 73 titles and was rated the best vert skater every year.

Skateboard Park near me in the USA

There are thousands of skate parks in the USA. But the most used and famous parks near you are_
✔ Burnside skatepark (Portland, OR)
✔ Denver skatepark (Denver, CO)
✔ Vans skatepark (Orange, CA)

Check out the three and see which one suits best with your skating style and the one you can go to regularly.

Is Street or Park skateboarding harder?

What are the 2 different styles of skateboarding in the Olympics?

As a beginner, starting with park skateboarding and then transitioning to street skateboarding can help you learn both types and become proficient in skating.

Finding the best place for skateboarding should be accessible as many people practice skateboarding. When you get experienced in both styles of skateboarding, I suggest you look into the competitions. Especially the Olympics, as both are now in the Olympics.