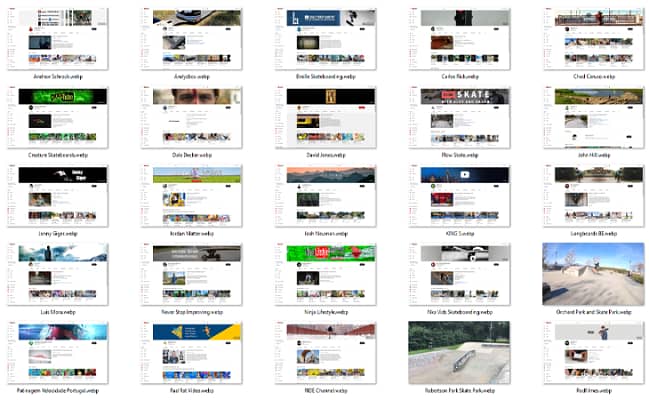 Do you like cool skating videos? Are you looking forward to improving your skills by watching YouTube videos? While it might sound easy, getting the right channel with the content you want can be challenging.

I know how frustrating it can be to explore through channels and search for specific content. Though many channels cover skating-related content, most miss crucial videos, like tips and tricks.

With 7.18K subscribers, the UK-based channel Andyzbox features a wide variety of skating Videos. Their playlist includes skating competitions, like the world cup, and indoor racing with electric longboards.

Sk8 book is an Indian-based channel that covers the content on skating from all over the world. The channel’s playlist features various pro skaters from whom you can learn new tricks. There are also various competition videos and also style videos to teach you some tricks.

This channel is educational and entertaining and provides detailed explanations of every trick.

Rad rat Video channel, which has over 15 million views, focuses on everything related to skating, including games. They also focus on math and mini-documentaries that are related to skateboarding.

With over 30 playlists on skating-related videos, the Rad Rat Video channel is a must-follow for the members of the skating community.

Patinagem Velocidade Portugal (Speed skating Portugal) is a Portugal-based speed skating channel. The channel’s playlists cover various tournaments and competitions from 2016. If you’re a fanatic of speed skating, this is a great channel for updates on the sport and more.

Sahil Skating college channel, which is Indian based, covers various skating lessons. The owner Imran, who is a 15 times world record holder, uploads great skating videos you can follow and train online. Since it covers both inline and roller skating, people interested in skating should follow the channel.

The skate hacks channel is an educational channel featuring various lessons and tutorials. Each trick is explained in detail and in slow motion so that by the end of a video, you will be more familiar with the trick.

Their playlists include grind and slides, flips, and tutorials which makes it recommendable to new and experienced skateboarders.

Creature Skateboards channel is another good channel with great street and park skating videos. The videos are shots of the various members of the channel as they freelance in a pack doing great tricks. With tons of styles and tricks to learn from the pros featured in the channel, it’s worth subscribing to keep up to date.

Flow Skate YouTube Channel by Alex and Shaun features various videos on inline skating. The Channels playlist includes “how to” videos where you can learn new styles and tricks. There are also tutorial videos covering basic to intermediate lessons on inline skating.

The never stop improving channel is a channel every skater should follow, especially beginners. Its owner Justin doesn’t just teach you how to skate better but also addresses the risks and advises you on how to protect yourself.

Moreover, the playlists are extensive, from beginner-level lessons and tricks through advanced with the sole aim of improving your experiences

The Brazilian-based Carlos Rick’s YouTube channel shows various styles by pro skaters from all over the world. Among the playlists are raw videos and footage of some known pro skaters from which you can learn new styles.

Another great playlist is the “Best Of,” which features the best tricks from various Pros.

Skateboarding Nation is a Brazil-based channel featuring several great skating videos. Among their playlist with many videos is “Awesome tricks” from which you can watch and learn various tricks from various pros.

While not all videos are educational, they’re all about the love of skateboarding, making the channel recommendable to skaters.

The skate box channel is an all-skateboarding video channel sharing advice and tricks. Their playlists range from educational videos and teaching tricks to warning videos that point out the various things that ruin the game of SKATE.  With great videos every week, you should follow the channel for more skating content.

The Hans Wouters channel features various tutorials and videos on longboarding. Hans, who is the owner, explains the tips in detail to ensure new learners understand. With 12 Playlists and over 100 videos, the channel is promising and worth following for more great content.

King 5 is a news and broadcasting network based in Seattle, Washington, which covers various activities, including sports. The channel occasionally covers skateboarding and has several videos on its YouTube channel. King 5 can be great for sports updates, especially if you live in Seattle or nearby areas.

The nine club channel features a live show between various skating legends and pros. They live the show on Monday at 12 am (pst), where various subjects on skating are discussed. You should follow the channel to catch some of the skateboarding legends and learn new stories.

Dale Decker‘s is among the skateboard YouTube channels that feature podcasts, product reviews, vlogs, and various skating tutorial videos for

Most of the videos are related to skateboarding, which makes the channel recommendable for skaters. Also, the channel has a challenge and DIY playlist that teaches you how to create custom obstacles.

The Ninja Lifestyle channel features reviews on various skating clips forwarded by the channel’s fans. There are also podcasts and some awesome skating videos you can learn tricks from. The playlists are extensive and cover a lot of skating activities, including fails and challenges.

The skateboard bruh channel features various skateboarding activities and product reviews. This channel is also educative, with several lessons on some stunts, and most videos are YouTube shots. The channel is overall fun and filled with great stunts, which makes the channel worth following.

Yung wavy is a skateboarding YouTube channel dedicated to teaching tricks and tips. The videos in the channel are well organized, with a playlist having more than one tutorial video for one trick. Follow Yung Wavy and join the fun while learning many new skating tricks.

With over 40 million views, the skate or die channel is a good skating boarding channel providing skating tips and news. Their contents are fun and educational, providing some advice to improve the skating experience.

Besides, they also have a “Skate stories” playlist where you can learn about various skaters’ skating journeys for motivation.

Nka Vids skateboarding is a channel as old as YouTube, featuring great skating content. Their playlists have a lot of videos recorded in great skate parks across the United States and Asia. By following the channel, you’ll learn new tricks and know new parks from the videos.

Woodward channels feature various competitive games, including skating, BMX, snowboarding, and Freeskiing. The channel has various videos and playlists. One of the playlists features the Dew tour Des Moines which covers competitions.

Woodward channel also provides tips to athletes, including how to do flops and backside feeble stalls.

The Jonny Giger channel, which is Switzerland based, features Jonny doing some of the most difficult tricks. This channel is great for lessons since he explains in detail what is required to land a trick successfully.

Some of the playlists on the channels feature challenges between pros in flat-ground skating.

Vlskate channel covers various skateboarding activities, including tutorials and reviews. The videos in the “How to videos” playlist are in detail for your understanding. Since it also features various tips videos, the channel is worth following by both beginner and pro skaters.

Davidsjones channel, which has almost a billion views, features snowboarding and finger-boarding videos. The playlists are fun and informative, where you can learn various finger-boarding tricks which you can do on a skateboard.

This channel also has some DIY videos, including making manual pads for a skateboarding challenge.

With over 200 million views, John Hill‘s channel explores various skateparks across the state and also features numerous pro skaters. His playlists include “Skateboard Tips and Tricks,” where you can learn many new tricks.

The exploration videos are a great way to learn the features of various parks across the United States and also their shortcomings.

Rodfilmes is one of the Brazilian-based YouTube skateboarding channels where you can learn skateboarding through tutorials. The channel has various playlists with lessons, including finger skating. With over 20 playlists of skating videos, the channel is worth liking and following.

Totallyanton channel, which has over 1.5 billion views, features videos uploaded by the owner Anton. The videos, which include YouTube shorts, cover many things but also skating and reviewing various skating products like_

Thus, the channel is fun and worth following for entertainment and to discover various new items.

With over 250 million views, Josh Neuman’s channel features many downhill skateboarding videos. Most of the playlists feature Josh longboarding downhill from some of the iconic high mountain roads in France, Switzerland, Italy, and America.

If you’re a fan of downhill skateboarding, the channel provides insight into the various places you can visit and also some lessons.

The Berrics YouTube channels date back to 2013 and have almost 500 million views. It Features some of the great skateboarders and hosts various skating tournaments. By watching a tournament like Battle of the Berrics, you can learn new tricks from pros and master them.

Sam Tabor‘s channel has over 1.4 million subscribers and features various vlogging and skating videos. His videos are not just pure tutorials, but they include vlogs covering the tutorial in between the video. The channel also has reaction videos but is averaged by vlogs, which is satisfactory and deserves a follow.

X Games are another action sports channel that covers various games, including skateboarding. Their playlists are full of a variety of videos from different sports shows. With over 50 videos on skating and skating competitions, the X games are a must-follow for skate lovers.

Luis Mora’s channel covers various skating activities across states and countries. Most of the videos show street skating providing deeper insight into different locations while featuring some young skateboarders. Though the channel doesn’t have a playlist, you should follow it for great videos from some iconic locations

Launched in 2011, the Ride channel features various skateboarding shows, events, and interviews. Some of their great tours and shows are originals and only available on their channel. With much educative content in their playlists, the Ride Channel can make a great addition to your YouTube skateboard channels.

Similarly, the experimental playlists show Aaron Kyro and other Pros taking various challenges, like kickflipping on a glass skateboard.

Andrew Schrock’s channel features a variety of Skateboard YouTube videos. In the Playlist, like how to skateboard (or die!), you can learn new tricks and improve your skating skills. The channel has several other skating playlists and videos, which can provide great lessons for you.

The wired channel has almost 10 million subscribers and features great tutorials and skating videos. Some of the tutorials are hosted by professional skateboarder Tony Hawk, who explains the tips and styles in detail. The channel also answers some of the frequently asked questions unrelated to skates.

Also, the channel has playlists on various activities like challenges and Gymnastics.

Well, now all left to do is connect to any of the channels above and enjoy. The videos will surely provide you with the intended content to aid in practicing and mood elevation. However, before trying any new tricks observed, don’t forget to wear protective gear.