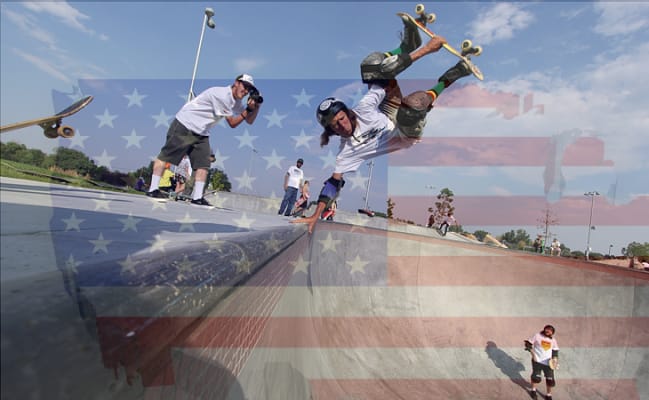 Skateboarding Laws And Rules Across Various US States

Ever since it began in the 1940s, skateboarding has been a controversial topic. The activity can be viewed as an extreme sport or a mode of transport, depending on the riding style. Whether practiced as a sport or used for transport, skateboards pose a hazard to both the rider and passers-by.

States initially passed skateboarding laws to stop rebellious youth from participating. However, since the activity has become popular in recent times, the rules have been amended to allow the sport and focus on safety.

Various states in the USA have different laws regulating skateboarding. If you intend to go out skating, it’s prudent to familiarize yourself with your state’s regulations to avoid being on the wrong side of the law.

What Are Skateboarding Laws In General?

In general, skateboarding laws are rules and guidelines governments institute to direct skateboarders. They instruct you on where you can skate, the time, your age as a skateboarder, and even how you do it.

Where And When Is Skateboarding Prohibited?

Most states in the US don’t permit skaters to skate out in public places like roads, parks, or government-owned structures. The activity is also banned in or near mass transportation areas like airports, trains, buses, and taxi termini.

Places of business are also out of bounds for all skateboarding activities. These include commercial banks, industrial areas, central business districts, designated business zones, and office properties.

Skateboarders are often granted a little freedom to skate through the streets. However, the speed, style, and time are all restricted.

Some states have designated parks for skaters to use. These states consider skating in the streets a severe violation, no matter how empty.

Skateboarding rules are very stringent in a few states, prohibiting the activity in all public areas. Some states’ laws are more relaxed, allowing it in public parks, sidewalks, bike paths, and low-traffic streets.

In most states, you can skate at night as long as it isn’t in commercial zones.

When it comes to injuries or the destruction of property, state laws tend to be against skateboarders. Most states prohibit skating in public spaces and government buildings. So any skating on these premises, regardless of injuries or property damage, is considered an offense.

In some cases, the law can hold owners responsible if skating injuries happen on their property. For example, according to the premises liability argument, a property owner may be held accountable for accidents and injuries on their property.

The premise liability argument is more consequential if the accident was foreseeable, like in the case of allowing minors to skate on your premises.

States categorize liability laws in different ways. Most have umbrella laws that grant blanket immunity to property owners in case of incidents involving high-risk recreational activities such as skateboarding on their properties.

A few states have laws and regulations that specifically target skateboarding. The law grants immunity to property owners in cases against skateboarders in these states.

Although the authorities frown upon breaking skateboarding laws, the offenders are seldom arrested. Instead, they get warnings or pay fines.

The severity of the penalties depends on whether the offense is seen as a misdemeanor or an infraction.

If your charge is a misdemeanor, you will likely be given a warning. However, an infraction carries a heavier penalty. Similarly, first-time offenders are more likely to be forgiven than repeat offenders.

Skateboarding Laws and Rules Across Various States of The USA

Skateboarding laws vary from state to state. Some states have strict regulations, while others are relaxed. It is prudent to know the rules of the state before skateboarding.

In this section, I’ll give you the skateboarding laws of some of the most popular skating states in the US.

Ohio is a peculiar case in terms of skateboarding regulations. During the day, you are not allowed to skate without first informing the police. When night comes, no one is allowed to operate, utilize or ride a skateboard within Akron city limits. Violating this rule is termed a third-degree misdemeanor.

In Auburn, Alabama, it is illegal to skateboard in areas designated for commercial activities. The state allows skateboarding in parks and other designated areas. Further, there are some guidelines on how you should go about the activity;

If you own or operate a park or skateboarding area in Alabama, you must follow the following guidelines;

Each county in California is allowed to adopt its local skateboarding regulations. However, there are still some state laws that apply to all counties. They include;

Skateboarding on the street in Canton is illegal. The law says no one shall use the roadway to skate unless crossing. Since it would be weird for you to carry your board to use only for crossing the road, this stipulation pretty much bans all skateboarding on Canton streets.

Moreover, if you wish to skate in North Canton, you must inform the police of your intentions.

Skateboarding is allowed in Chicago but is prohibited in commercial areas and the business district. There is also an interesting dynamic: although the activity is gaining popularity, law enforcement officers aren’t pleased about seeing skaters in their neighborhoods.

In Eau Claire, the law prohibits riding skateboards on any streets or sidewalks within the city’s business district. Although skateboarders are forbidden from skating on private property, they can do so if the owner permits them.

Las Vegas has no prohibitions on skateboarding. However, there are rules that govern the behavior of skate park owners and the skaters using the parks.

Rules for skaters in Las Vegas;

In addition to these stipulations, there are some standard rules;

Riding skates at speeds more than 10 miles per hour or on roads graded 3 percent or more is forbidden in Los Angeles county.  Downhill skating is also outlawed in the city.

According to Los Angeles law, skateboarders must follow traffic rules like using the correct lane, riding at speeds below 40 miles per hour, and obeying road signs.

Miami is one of the top skateboarding cities in the United States. You are not allowed to skate on any property owned by the government unless it is a designated skating area. Further, any skateboarder under 16 years of age is required to wear a helmet by law.

Florida law also places liability for any injury or destruction of property while skateboarding on the skater, even if it occurs in designated skating areas. Skating at a police station is also strictly forbidden.

New Jersey is one of the states that has peculiar skateboarding laws. The activity is allowed on the streets, and to ensure safety, the state requires car drivers to honk before overtaking skateboarders.

You can ride an electric skateboard without fear of arrest in the streets of New Jersey since they are legal in the state. However, for your safety, the law forbids these electric boards in streets with speed limits above the 35 miles per hour top speed of most boards.

Unlike in most states where the rules may vary, the laws of New York state are the same as those of New York City. In the city, skateboarders have to obey the same rules as drivers on the road. They must stop at red lights and yield to motorists or other users.

Some of the more skating-specific rules include;

Philadelphia skateboarding law is similar to most other states in many respects. Regulations prevent skateboarding in prohibited areas like private property or business areas unless there are signs that allow the activity. There’s also a regulation that outlaws skating on memorials and statues.

Skateboarding was illegal in some parts of Philadelphia until a few decades ago, but the number of skaters has risen significantly since then. However, a few kinks in the law still need to be straightened. For example, a skateboard can be considered a vehicle under Philadelphia law, leading to some problems.

Skateboarding was considered a passing craze and was illegal before the turn of the century. However, that changed when in 2000, new legislation was passed, legalizing it. Some of the skateboarding regulations in Portland are;

Being one of the leading skateboarding destinations in the United States, San Francisco has many laws and regulations regarding the activity. They include California state laws and local laws such as;

California state law applies to Santa Cruz as well. It is illegal for a skateboarder to ride in a manner that interferes with normal traffic flow in the streets. Some traffic guidelines for skaters to keep in mind include;

Out-of-bounds areas for skateboarders in Santa Cruz include;

FAQs Regarding Skateboarding Laws and Rules

Here are answers to some common questions about skateboarding laws.

Is skateboarding illegal in the USA?

Although skateboarding was illegal in some parts of the USA in the past, it is no longer illegal. Skateboarders are free to skate wherever and whenever the law allows them within the country.

Is skateboarding illegal in some states?

No, skateboarding is not illegal in any state. However, there are regulations on the activity that vary in strictness from state to state. Some states have relaxed measures while others require skateboarders to wear reflectors and only skate during the day.

Why is skateboarding not allowed in public places?

The biggest reason for banning skateboarding in public areas is because the activity is a nuisance, destroys property, and leads to injuries. Even if it doesn’t directly lead to the injury of pedestrians, the obstacles used by skaters are dangerous because they are a tripping hazard. You may take a look at skateboard injury statistics.

Skating appears like loitering and presents a poor image, so many cities don’t like the activity. Hence, to avoid image issues, cities either choose to ban skateboarding or create designated parks for skaters.

How to avoid skateboarding dangers and injuries?

Follow the recommendations below to keep injuries at bay;
➼ Always put on protective gear like helmets, knee pads, and elbow pads.
➼ Choose a suitable skating surface. Skating parks are better than the streets.
➼ Avoid having more than one person per skateboard.
➼ Hitching fast-moving vehicles are risky, so avoid it.
➼ Ensure that your board is in the best shape possible.

Skateboarding is a great recreational activity but can be a nuisance if no checks are imposed. Injuries, property destruction, traffic interruption, noise, and general disorder are some of the results when skateboarding is left unchecked.

Skateboarding rules provide a framework that protects both the skaters and the public. The laws vary from state to state, but the overall effect is the same; they promote harmony in the community. Before going out to skateboard, I recommend you familiarize yourself with your state’s skating laws.